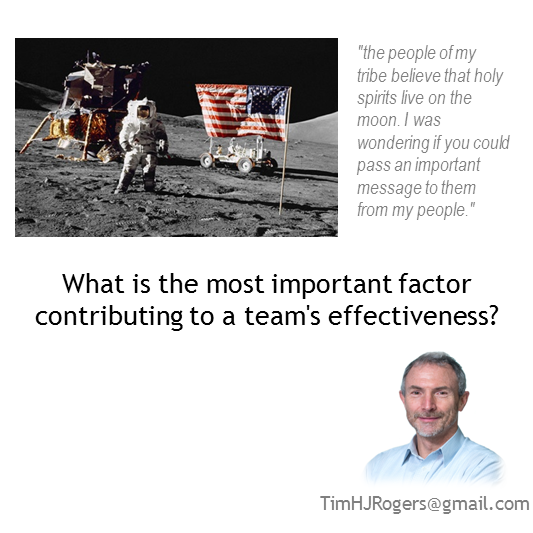 What matters isn't so much who's on your team, but rather how the team works together. So what was the most important factor contributing to a team's effectiveness?

It was psychological safety - TRUST

Simply put, psychological safety refers to an individual's perception of taking a risk, and the response his or her teammates will have to taking that risk.

Google describes it this way: In a team with high psychological safety, teammates feel safe to take risks around their team members. They feel confident that no one on the team will embarrass or punish anyone else for admitting a mistake, asking a question, or offering a new idea.

1.    Listen first.
2.    Show empathy.
3.    Be authentic.
4.    Set the example.
5.    Be helpful.
6.    Disagree and commit.
7.    Be humble.
8.    Be transparent.
9.    Commend sincerely and specifically.
I highly recommend reading the full article (source below). The interesting think about trust is that it is a function of shared values, beliefs, education and attitude (hope for the future) and  delivery, rewards, benefits (experience of the past truth).

Whilst the key elements above might seem universal I am not sure that trust is.

There are plenty of political leaders who exhibit many of the above traits, but faith in politicians is arguably at an all-time low. I highly recommend the book Sapiens by Yuval Noah Harari as an insight to past, present and future and how this shapes our attitudes, expectations and drive. The story below is telling.

In the months leading up to the expedition of Apollo 11, the astronauts trained in a remote moon-like desert in the western United States. The area is home to several Native American communities. One days, as they were training, the astronauts came across an old Native American. The man asked them what they were doing there. They replied that they were part of a research expedition that would shortly travel to explore the moon. When the old man heard that, he fell silent for a few moments, and then asked the astronauts if they could do him a favor.

"What do you want?" they asked."Well," said the old man, "the people of my tribe believe that holy spirits live on the moon. I was wondering if you could pass an important message to them from my people."

"What does it mean?" asked the astronauts."Oh, I cannot tell you. It's a secret that only our tribe and the moon spirits are allowed to know."

When they returned to their base, the astronauts searched and searched until they found someone who could speak the tribal language, and asked him to translate the secret message. When they repeated what they had memorized, the translator started to laugh uproariously. When he calmed down, the astronauts asked him what it meant.

The man explained that the sentence they had memorized so carefully said, "Don't believe a single word these people are telling you. They are here to steal your lands!"

Yuval Noah Harari goes on to say that given the divisions of nations, religions, and politics the key remaining unit in which all trust despite our differences is money.

As much as fine qualities may help build a team it is frequently the pursuit of reward (money, fame, success) that really bind them.

ABOUT THE AUTHOR
Tim Rogers is a Qualified Change Practitioner and PRINCE2 Project Manager, with an MBA in Management Consultancy. Past projects have included the incorporation of Ports of Jersey and Operations Change and Sales Support for RBSI and NatWest. He is a tutor/lecturer for the Chartered Management Institute.

Join our tribe by subscribing.